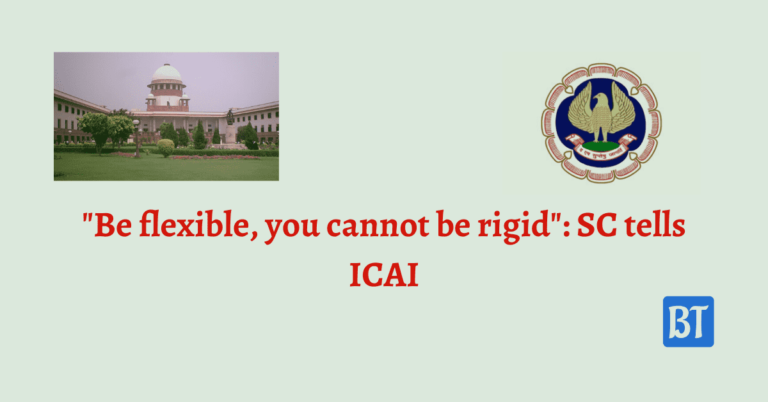 The ICAI sought time till Thursday, July 2 to issue fresh guidelines on this year’s cycle of exams.

The Institute of Chartered Accountants of India (ICAI) today sought time from the Supreme Court to issue fresh guidelines regarding the present cycle of this year’s CA exams.

During today’s hearing, the Court observed that the ICAI should consider permitting the students to opt out of the exams till the last day, as the situation around COVID-19 is dynamic and not static (Anubha Shrivasta Sahai v. ICAI).

The Bench of Justices AM Khanwilkar, Sinesh Maheshwari, and Sanjiv Khanna noted that at a time like this, the Institute ought to be flexible and not rigid towards the exam pattern.

Today, Advocate Alakh Alok Srivastava, appearing for the petitioner, sought to apologize to the Court for the inadvertent mistake in the number of students scheduled to appear for this cycle’s exam. He clarified that the number stands at around 3.46 lakh, as opposed to over 4.5 lakh as mentioned in the petition.

Senior Advocate Ramji Srinivasan, appearing for ICAI, told the Court that the concerns of the petitioner are unfounded as regards the opt-out option and added that ICAI was bound by the Chartered Accountants Act.

Srivastava argued that there are students who stay in what are now containment zones and there may be aspirants residing in places where the lockdown has been extended by the state governments. He added that these students will lag behind.

Further, several students would have opted for exam centres in states such as West Bengal, that are going to be under extended lockdown.

“There are also a limited number of exam centers. Even ICAI says only 232 centers are there. Many students in Bihar have opted for the 15-day long exam in Kolkata which is under lockdown.”

Srivastava pointed out that the three main issues pertained to an increase in the number of exam centres, candidates in places under extended lockdown, and how the CBSE model can be implemented in this scenario.

ICAI told the Court that there are 500 exam centres across the country which have been sanitized and properly prepared with optimum hygienic conditions for the students. “It’s not possible to change,” Srinivasan submitted before the Court.

The Court then queried,

“There can be a situation where a student opted for a centre but that becomes a containment zone. Can the student opt for a last-minute change of centre?”

While Srinivasan said that a change in centre is an option kept open for the students, the Court suggested that this option should be left open till the last week. Srinivasan, however, said that the deadline for changing the exam centre is a point he would have to seek instructions on.

This prompted the Court to observe,

“The change of centre should not be be freezed but should be open for all till the end. Till the last week…You need to be flexible, you cannot be rigid.”

The Court then said,

“You have to make a provision then that if a student passes the exam in November, you have to say that it means they have passed the exam in July.”

Srinivasan argued that this arrangement would not have any impact as such, and the aspirants would be able to go ahead with the course either way. As on Saturday, nearly 52,000 students have chosen to opt-out of the exam, Srinivasan told the Court. He added that the deadline could be extended by one more week.

The Court, however, suggested that the deadline needs to be extended till the last day and any person not appearing for the exam should be treated as an opt-out candidate, to be adjusted in the November cycle.

In response, Srinivasan said that the same should only be permitted if the student points out a COVID-19 related difficulty due to which they are unable to attend the exam.

ICAI also apprised the Court of the exam pattern for CA exams, where each exam is divided into two groups of four subjects each. Failure to attend the exam of even one subject of a group would lead to the student being required to write exams for the entire group in the next cycle. These groups cannot be separated, Srinivsan told the Court.

The institute, however, sought time from Court to issue a fresh notification as regards the exam and requested for the matter to be adjourned till Thursday, July 2. The Court said that while doing so, the ICAI ought to keep in mind the entire protocol as well as the guidelines issued by the Ministry of Home Affairs (MHA).

The Court will hear the case next on July 2, once ICAI has placed a new notification for this exam cycle before the Court.

The CA exams for the cycle of May 2020 are scheduled to be held between July 29 and August 16. In relation to these exams, the ICAI had issued notifications on June 15 and June 20 notifying the “opt-out” option, which the petitioner contends is a highly discriminatory and arbitrary move.

In the plea, the petitioner urges the Court to quash the notifications regarding the opt-out option on the grounds that the same is in violation of the fundamental rights under Articles 14 and 21 of the Constitution of India.

The exercise of this option would lead to underprivileged and unfortunate aspirants living in remote areas or in red zones and containment zones amid the COVID-19 pandemic to lose out on a precious year. On the other hand, those aspirants who have the means to access exam centres and who are fortunate to live in big cities as well as in green zones will have the benefit of attending the exam, the plea says.

Earlier the Supreme Court had sought a response from the ICAI on the plea which sought quashing of the notification on the “opt-out” option in the CA exams after the institute told that the option given would not cause any prejudice.